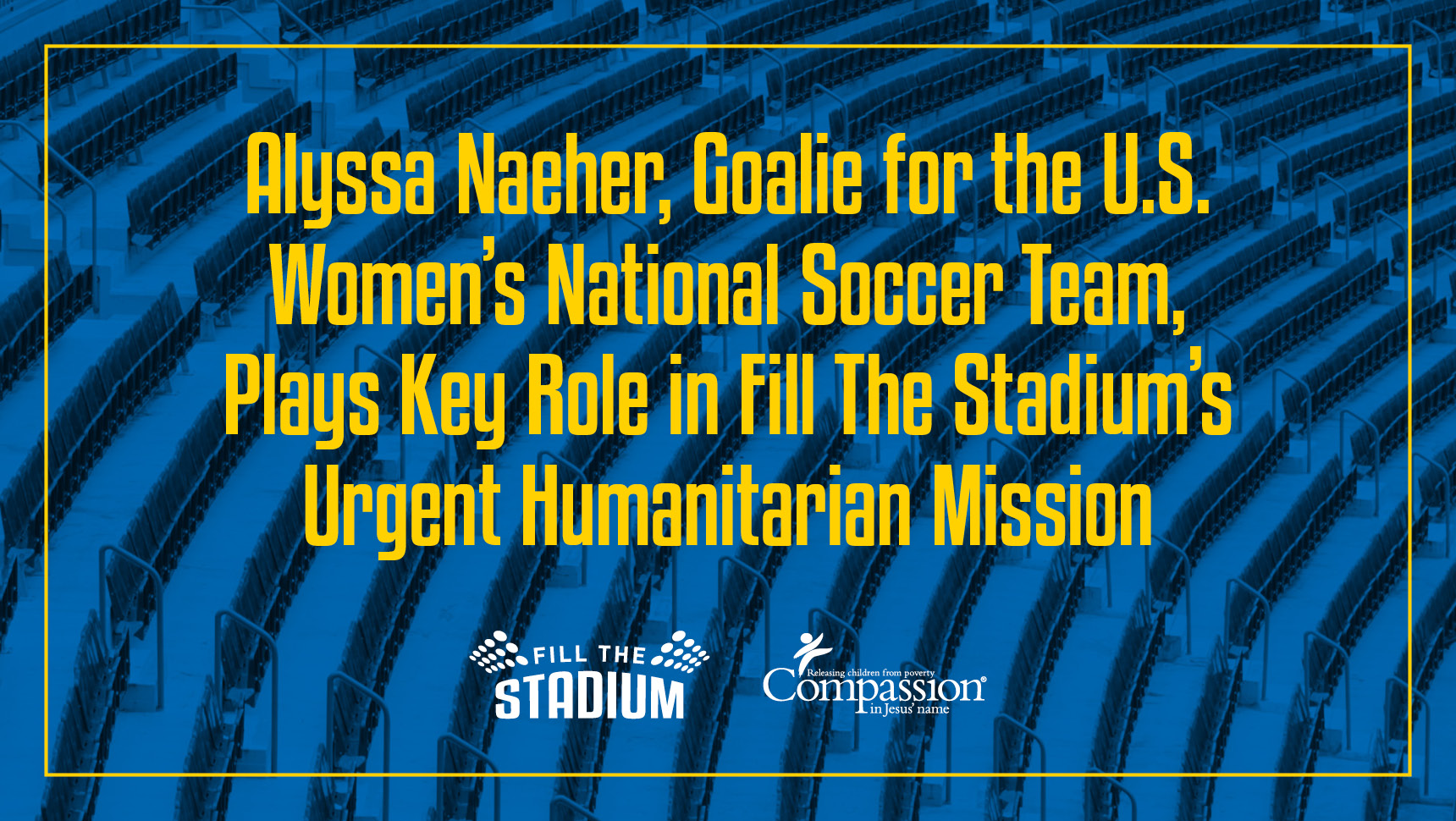 COLORADO SPRINGS, COLO. — The Summer Olympics in Tokyo are coming up fast—and Alyssa Naeher, the number-one goalkeeper for the U.S. Women’s National Soccer Team, is likely to be the starting goalie as this standout American team goes up against its top global rivals in July.

Naeher knows a lot about team play and ambitious goals. Not only was she the starting goalie on the 2019 World Cup-winning team, she has played a key role—along with other top athletes from many sports—in the distinguished effort by Compassion International and its Fill the Stadium (FtS) initiative, which is providing essential food, medical care, and support during the COVID-19 pandemic.

“All around the world, there are kids in crisis,” said Santiago “Jimmy” Mellado, CEO of Compassion International. “These children aren’t dying of COVID-19. They’re dying of starvation.”

Mellado recruited a team of pro athletes and leaders—including Naeher—to help the Fill the Stadium initiative of saving 70,000 children in crisis in the developing world. To date, they’ve raised over $28 million for some 56,000 children and their families who are living in extreme poverty.

But they haven’t “filled” the stadium yet. They’re still working to reach a total of 70,000 children in crisis.

Said Naeher of this worthy effort, “There’s a lot of people hurting right now, a lot of extra people needing help at an extreme time. When I hear the number 70,000—it’s a big number. For me, I compare that to a specific event of playing the World Cup final in Lyonnais in 2019 in a sold-out stadium. It was energetic. It was loud. And it was an experience people chose.

“Now, we can reinsert Compassion International and children into that environment. I see the visual in my head. And since 70,000 kids around the world can benefit from this project and live a better life because of our help, I’m challenging youth soccer clubs and others to help ‘fill a seat’ in the stadium for a great cause.”

Alyssa Naeher was named to the U.S. Women’s National Soccer Team roster for the 2016 Summer Olympics, in Rio, Brazil, where they placed fifth. She has since become the team’s number-one goalkeeper. On July 1 and July 5, 2021 in East Hartford, Connecticut—her home state—Naeher will be playing in a pair of exhibition games as she and the team do their final tune-ups ahead of the Summer Olympics.

In the COVID-19 era, “We are all experiencing the reality of empty stadiums,” says the Fill the Stadium team. “The average NFL stadium holds 70,000 seats. We need to reach that many kids. That’s why this effort so desperately needs a caring, prayerful and thoughtful community to join together in this needed relief.”